A rollicking comedy where nostalgic sitcom fantasies, strange fertility regimens, and gender norms collide in one woman's search for certainty in a world that is anything but.

First of all, Many Thanks to everyone who has contributed in a variety of ways to keeping No Strings Theatre Company at the Black Box Theatre for 20 years! We really appreciate all your support through the years. I originally thought I would again direct Edward Albee's Seascape, the opening NSTC production on September 8, 2001. However, Peter and I saw this play in Denver, Colorado at Theatre 29 where the playwright is the Creative Director. Lisa was at the performance we attended and when it ended, we asked her if we could produce it at our Black Box Theatre. We were thrilled she consented and thought it would be a great beginning to our 20th Season.
My amazingly creative cast, crew and I have had a wonderful time working on this intelligent and thoughtful play. On the surface, it draws its comedy from familiar stereotypes, June, the perfect 1950's wife, Vivian, the evangelical preacher's wife, and Barb, the radical feminist. We have worked to find the humanity and truth of each woman's struggle to find herself and to accept others. Having lived through all the decades portrayed in this play, it was great fun assembling music to reflect the eras. We hope you enjoy watching it as much as we enjoy doing it for you.

And the winner is - 'The Mrs. Wheatland Pageant'!
- By MIKE COOK, Las Cruces Bulletin

What do you do if you're about to turn 30, you are desperate to have a baby and your husband is suddenly wearing an apron and pumps? You host A beauty pageant, of course!

Throw in one friend who is a high-fashion Jesus freak and another who wears men's overalls and fixes toilets and you've got the makings of one of the most unusual plays I've ever seen.

Wheatland Pageant" opened Black Box Theatre's 20th season Friday night, Sept. 6, with one of the most appealing collection of actors I've seen in a long time. Bravo to director (and Black Box co-owner) Ceil Herman for insightful casting of Ashley Dahl, Bobby Senecal, Karen Buerdsel, Gina DeMondo and Autumn Gieb. They are all talented Las Cruces theatre veterans who bring out the craziness, the self-doubts and most importantly the charm of every one of their characters.

"Ensemble cast" is a somewhat shop-worn phrase in the review writing business, but it genuinely applies to this show. All these actors bring unique talent and appeal to June Cleveland's kitchen and to the stage upon the stage.

Even without the sashes, tiaras and scepters, "Mrs. Wheatland" is a pageant of fine acting.

Dahl is a very strong lead as June, who can't bear the thought of turning 30 without being pregnant. Senecal, who has done a lot of impressive acting at the Black Box, does it again as June's eccentric and sweet tempered husband, Jim.

Buerdsel, one of the most talented and versatile actors in Las Cruces, creates a fabulous Vivian, who dresses to impress as she spouts Jesus speak and tries frantically to hold onto her philandering husband.

Major kudos also to Gina DeMondo who is just so perfect as Barb, who detests fashion, finery and man-finding. Gieb has a small role as an offstage announcer, but she manages to bring life and humor to the never seen but much enjoyed Millie.

Josh Taulbee acted in seven consecutive shows at Black Box last season but chose the back-stage role of scenic designer and stage manager for "Mrs. Wheatland." He, too, has much to be proud of in this production, as do costume designer "Bobcat" Young and the Hermans, Peter as lighting designer and Ceil for her direction and sound design.

Erickson, the playwright, will be in Las Cruces for the Saturday, Sept. 21, performance of her play and will hold a talkback afterward.

As I watched the play opening night, I remembered being at Black Box for the very first show, "Seascape," in September 1999. I played the waiter in "Beyond Therapy" later that same year at the Black Box and it remains one of the best shows I've ever been in. It also introduced me to Las Cruces theatre, which completely changed my life. Congrats and a deeply heartfelt thank you to Ceil and Peter Herman for 20 amazing years of theatre at the Black Box.

Tickets are $15 regular admission, $12 for students and seniors over age 65.

Tickets for Thursday night performances only are $10. Regular season tickets are $85 and $70 for seniors and students.

Mike Cook may be contacted at mike@lascrucesbulletin. com. 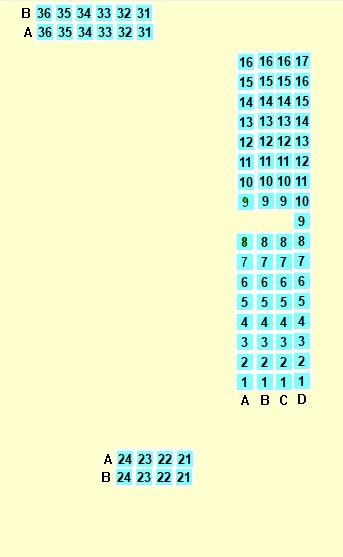