First produced at the Opera Comique, London, November 17th, 1877. "The Sorcerer" followed "Trial by Jury" (1875), and was the first production of the syndicate formed by Richard D'Oyly Carte. Although it may lack something of the practiced technique of the later Gilbert and Sullivan operas, "The Sorcerer" has a delightful freshness and easy flow. There is abundance of fun and some charming music.

Chorus of Villagers
ACT I

It is mid-day and the villagers of Ploverleigh are assembled in front of the Elizabethan Mansion of Sir Marmaduke Pointdextre, voicing their joy at the betrothal of Sir Marmaduke's heir Alexis to Aline, the only child of an equally aristocratic neighbour, the Lady Sangazure. There is one present, however, who does not share in the general joy. Constance, the daughter of Mrs. Partlet, is downcast and confesses to her mother that she loves (vainly, it seems) the Vicar, Dr. Daly. On his appearance they withdraw and Dr. Daly sings the notable ballad, "Time was when Love and I were well acquainted," in which he laments the days now gone when, as a pale young curate, he had the adoration of the maidens of his flock. Mrs. Partlet, anxious to help Constance, comes forward and leads the conversation to the subject of marriage, but it is obvious from his replies that he looks on himself as a confirmed bachelor, and Constance is led away sobbing by her mother.

The Vicar now turns to welcome Sir Marmaduke and Alexis in weighty language, and with a touch of allegory that pleases Sir Marmaduke, who is a great admirer of the school of stately compliment, and a stickler for "blue blood." He claims that his own family is directly descended from Helen of Troy, and is all for a marriage of pedigree, regarding love as a comparatively unimportant accessory.

Aline makes her appearance and is greeted by the village girls. She acknowledges their good wishes, and her mother, Lady Sangazure, adds her congratulations. The men now welcome Alexis and the lovers greet each other with ecstasy. Then follows a stately duet ("Welcome joy, adieu to sadness") between Sir Marmaduke and Lady Sangazure, who were lovers in their young days. The stately gavotte measure is punctuated by their dreams of what might have been.

A notary has now arrived, all is prepared for signing the marriage contract. This done, Alexis and Aline are left together. Alexis does not agree with the views of his father, and, believing that men and women should be coupled in matrimony without distinction of rank, has done some propaganda on the subject. So far, however, his ideas have only been welcomed by the humbler classes. His own happiness seeming assured, he reveals his scheme for making the whole village happy. He has engaged John Wellington Wells, a Sorcerer, to administer secretly a love-philtre to all the others, which will first send them to sleep, and on their awaking cause them to fall madly in love with the first person of the opposite sex they may see who has also drunk the potion. It has no effect on those already married.

Mr. Wells is introduced in the well-known patter song, and then details are discussed. It is decided that the philtre shall be placed in a large teapot which will be used for the "banquet" to follow. Mr. Wells then proceeds to his horrific Incantation, and after the Fiends have disappeared, the villagers return, make merry, and each drinks of the enchanted tea. The act closes as, after struggling vainly against the charm, all present save Alexis, Aline and the Sorcerer fall insensible.

ACT II
It is midnight, and the villagers are still lying where they have fallen. Mr. Wells, with a great sense of fitness, has had the more exalted members taken home and put to bed "respectably." As the villagers wake, each falls in love with the first person of the opposite sex visible, Constance and the Notary making one couple.

Alexis is so pleased with his success that he urges Aline to join with him in drinking the philtre, in order that nothing may be left to chance. She refuses, and they quarrel. The remaining characters begin to arrive: first Dr. Daly, the worthy Vicar, who is puzzled because, in a village hitherto rather slow in the matter of marriage, he has suddenly had a request for hasty weddings from everyone -- even Sir Marmaduke. Alexis is none too pleased when he finds that the philtre has led the Baronet to fix on Mrs. Partlet, the Pew Opener. Still, he must live up to his opinions, and there is a congratulatory quintet from those concerned.

Mr. Wells, having caused the mischief, falls a victim to his own spell, for Lady Sangazure, entering, sees him and at once adores him. He, on the other hand, not having drunk the philtre, does not reciprocate, and in an amusing duet endeavours to dissuade her. Without success, however, for she threatens to bury her woe in her family vault.

Aline, having pondered the matter, has decided to fall in with her lover's wish, and drinks the philtre. Immediately afterwards, she catches sight of Dr. Daly and of course falls in love with him. He is delighted at his good fortune, but Alexis, coming in full of remorse, is astounded to find his embraces repulsed. Explanations ensue, and the Vicar obligingly offers to quit the country and bury his sorrow "in the congenial gloom of a Colonial Bishopric."

This is not enough, for Aline is still under the influence of the philtre, and no longer loves Alexis. They appeal to Mr. Wells, who reveals that there is one way only in which the spell can be revoked. Either he or Alexis must sacrifice himself to Ahrimanes. Argument ensues, and the issue is put to popular vote; John Wellington Wells loses and disappears into the earth to the sound of a gong.

All quit their temporary partners to rejoin their old lovers, and Sir Marmaduke, claiming Lady Sangazure, invites them all to another feast in his mansion. 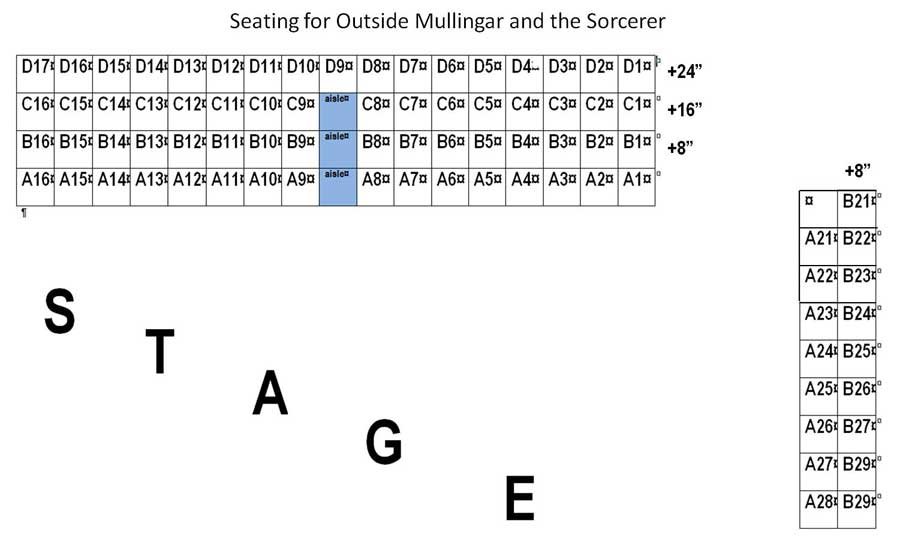 We have obtained permission to stream Bosoms and Neglect. Please see the event page to the left for details.

The ticketing system described below is NOT in use for Bosoms and Neglect. Please follow the instructions in the event page to the left!

We are now using a new ticketing system. To buy tickets, go to the "buy Tickets Tab under EVENTS in the Main Menu above. If you are having a problem with the system, call (575) 523-1223 to reserve seats today. The NEW ticketing code for Donor/Volunteer Pro, Participant, Pre-Paid coupon or any similar coupon is Z2C5T4B6


If you cut and paste a code into the ticketing system, be sure that there are NO spaces proceeding the code