by Aeschylus in a translation by Robert Fagles, directed by Algernon D'Ammassa

As part of its 18th season in downtown Las Cruces, the No Strings Theatre Company, located at the Black Box Theatre, presents its first production of a classical Greek tragedy. "Agamemnon," a play first performed in 458 B.C., opens on October 7 and runs through October 23

Director Algernon D'Ammassa says that were it not for problems of translation, Greek playwright Aeschylus would be read and performed as much as Shakespeare. "Aeschylus wrote as many as 90 plays, but only a few have survived. He essentially invented dialogue, this concept of having principal characters talk to each other. And he wrote about war from personal experience - he fought in the Persian Wars."

"Agamemnon" is the first of a trilogy taking place immediately after the Trojan War. It tells the story of Agamemnon's return home from the sack of Troy, and how he is murdered by his wife, Clytemnestra, in revenge for his sacrifice of their daughter. The story grows more complicated, however, when it is revealed that the scion of a rival family is involved, and the audience is left to ponder whether Clytemnestra is avenging her daughter or seizing power for herself - or both.

The role of Clytemnestra is played by Michelle Tomlinson, a Los Angeles- based actor best known for her roles in horror films such as The Cellar Door, Brain Dead, Axe to Grind, and George's Intervention. Tomlinson is a New Mexico native making a return to stage acting after a long absence, and during the month of October she will offer master classes on acting in the film industry in Las Cruces and Albuquerque.

The rest of the cast consists of Marissa Bond, Gina DeMondo, Autumn Gieb, and Erin Wendorf as the Chorus, along with William Allen as Aegisthus, Rafael Medina as Agamemnon, Norman Lewis as the Herald, Kerrigan Sivils as Cassandra, and Danny Wade as the Watchman.

If you go see "Agamemnon" at the Black Box - and you definitely should - you will experience theater as it was more than 2,000 years ago and as it should be today.

You'll see some outstanding Las Cruces actors - and one brilliant visiting actor - bringing to life (and grisly death) some of the most famous characters in Greek mythology.

"Agamemnon" was first performed about 458 B.C.E. and was written by Aeschylus, a Greek playwright and soldier, who, like many in his audience had fought in the Persian Wars and other regional conflicts. The version you will see is based on Robert Fagles' modern translation.

It begins just before the triumphant return of Agamemnon to Argos after 10 years of fighting in the Trojan War and his sacrifice of his young daughter to appease the gods. Because the story has been told literally thousands of times over the past two millennia, no spoiler alert is required to tell you that Agamemnon's wife, Clytemnestra, has a special surprise waiting for him to avenge their child's death.

It is a rich tale told powerfully in this production by director Algernon D'Ammassa, who also had to take on the role of Aegisthus (Clytemnestra's lover and co-conspirator) shortly before the play opened when an actor was forced to drop out.

D'Ammassa's acting, like his direction, is excellent. In both cases, he is able to fill the entire stage with his own energy and with that of all his players. This is Greece and these are the star-crossed royals, elders and storytellers of Argos.

I would die for Rafael Medina's entrance as Agamemnon at the end of the first act. The image is stunning. And, without crown or trappings, Medina is both regal and commanding in silence and in speech, in life and in even in death.

Michelle Tomlinson, a professional actor from Los Angeles, said she took the role of Clytemnestra at D'Ammassa's request because it scared her. (Actors, she said, should do things that scare them.) Tomlinson overcame that fear and created an intense and intelligent lead for this play. The suffering and rage that Tomlinson brought to this part gave an edge to her character that was as sharp as the sword she used to secure her vengeance.

The chorus, comprised of Autumn Gieb (chorus leader), Marissa Bond, Gina DeMondo and Erin Wendorf, represented the elders of Argos, trying to protect and preserve their home, their heritage and their king.

The four often spoke together, but each actor also had a strong individual voice that helped to weave together the tale of Argos and the Trojan War, with all the fear, sacrifice and bravado that war engenders. Gieb, Bond, DeMondo and Wendorf set the tempo for the show and drove it from start to finish - a quartet of gloom and joy that was creepy at times, but also tender and raw and human.

Kerrigan Sivlis was compelling and uncompromising in her grief and rage as the captured Trojan princess Cassandra, a prophetess cursed by the god Apollo so that no one believes her foretelling of her own fate or that of Agamemnon and Clytemnestra.

Norman Lewis was a fabulous herald, with a potency that filled the entire theater. He also had some of the best - and best-delivered - lines in the show, including one of my favorites: "Who but a god can go through life unmarked?" Certainly no one in this production!

Danny Wade provided bookends for the play as the Watchman, opening the show with anticipation and then delight as the first to see the distant fire signaling victory in the Trojan War, and then closing it with a final pronouncement on the fate of Argos and the Greeks.

Wade is a talented actor who also excelled as a musician in this show, providing the underlying percussion that added color and depth to many scenes. Gieb and Medina also performed musically in the show.

"Agamemnon" is theater at its roots and at its best. Go see it. If you're worried that it will be a long evening of strange language, don't be. The play ran about two hours, including the intermission, and was entertaining and engaging throughout.

Tickets are $15 regular admission, $12 for students and seniors over age 65. Tickets for all seats for the Thursday, Oct. 8 performance are $10. 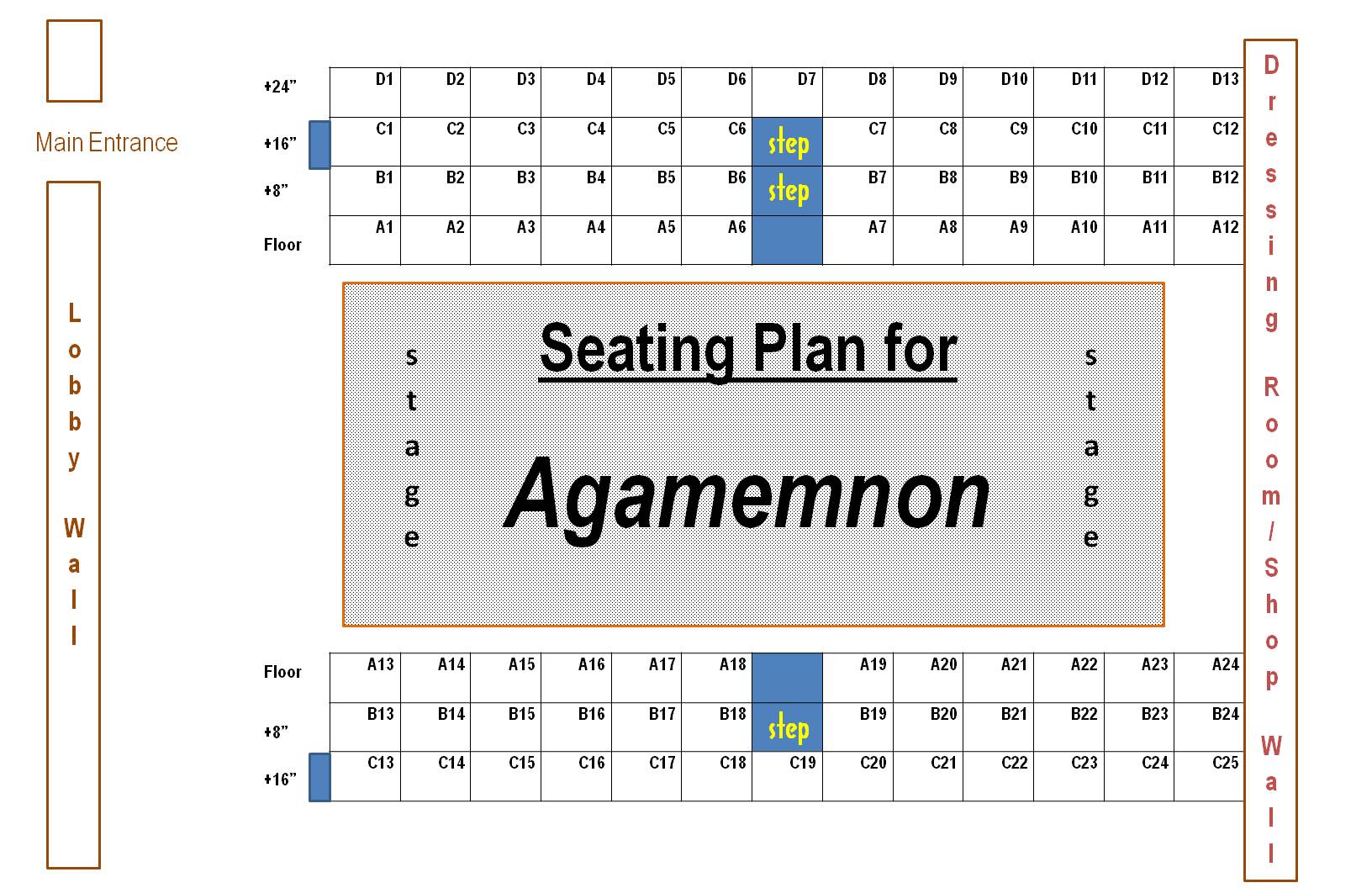