The play was written in 1957 and has become one of Pinter's most produced plays of all time. This "comedy of menace" transcends traditional theatre by taking a familiar setting - in this case an English home - and turning it into an unsettling place of lies, deceit and chaos. It is both menacing and intriguing.

"Fascinating capacity to be menacing, ominous and evocative of some dark and threatening doom." -The New York Post

"The most interesting play to be seen on Broadway." - The New York Times

When The Birthday Party opened in 1958, it was a theatrical disaster. Critics couldn't say enough horrible things about it and the show closed so quickly one had to wonder whether or not the event had actually happened. Today, The Birthday Party is Pinter's most widely known and frequently produced script. One suggestion for its initial failure is simply that it opened at time when "realism" prevailed, character types were understood, and all problems and conflicts had a resolution. This is simply not the case with most of what Pinter writes and it is certainly not true of The Birthday Party.

Any attempt I might make to provide a framework for the story is going to fall short and is likely to create more confusion than clarity. Pinter, himself, is notoriously reluctant to analyze his own work. Upon the 50th Anniversary of the play, a reporter asked him why The Birthday Party had endured. He offered both a political and personal explanation. "It's possible to say," he tentatively admits, "that two people knocking at the door of someone's residence and terrorizing them and taking them away has become more and more actual in our lives. It happens all the time. It's happening more today than it did yesterday, and that may be a reason for the play's long life. It's not fantasy. It just becomes more and more real." Chilling? Prophetic? Paranoid? You decide.

As always, there is a litany of people who deserve my undying gratitude. Those people include, Ceil and Peter Herman for saying "Yes" to the show and to my crazy seating ideas and minimalist set. Eva Carabotta learned to run the light board in one rehearsal. (Thank you, Daniel Caroe, for recruiting and teaching her). Autumn Gieb, your costumes are amazing as ever AND thank you for doing double duty and understudying the role of LuLu.

I must conclude by thanking this wonderful cast. They have wrestled with their characters and the relationships between characters. They have taken every directorial note and tried all my crazy ideas. We chose to be very straightforward in our production of The Birthday Party. We present this classic comedy of menace as we believe Pinter meant it to be -without interpreting it for you and without adding layer upon layer of personal bias, symbolism, metaphor or any other rhetorical analysis. First and foremost, we want you to be entertained. If you leave with more questions than answers, then we've done our job.

When I was rehearsing and performing in Harold Pinter's "The Hot House" at the Black Box Theatre last spring, my friends would ask me, "What is it about?" I could never really figure out a good answer, except to say that I thought it was a wonderful play that I loved being in and you should come and see it.

Except for the being in it part, the same can be said for Pinter's "The Birthday Party," which is now being performed at the Black Box, and continues through Sunday, March 20.

Pinter's plays are famous for defying description, but also for their intricate plots, deep characters and fascinating use of language. "The Birthday Party" is probably his most famous work.

Here is my attempt at a description. The play is set in a London boarding house owned by Petey (Mark Hammersmith) and Meg (Jamie Bronstein). They have a single guest, Stanley (Bobby Senecal) and an occasional visitor, Lulu (played by Heather Hosford for six performances and Autumn Gieb for three). Two other guests arrive, the blackclothed and mysterious Mr. Goldberg (Sam Z. Damon) and Mr. McCann (Joshua Taulbee). Goldberg and McCann belong to some unnamed but clearly nefarious organization that Stanley used to belong to. They have come to return him to the fold as it were, and arrive just in time for the birthday party being thrown for Stanley by Meg, even though Stanley insists it isn't his birthday.

With a very simple set and costumes and talented actors and crew, director Karen Caroe has created a delightful black comedy that you will enjoy, even if you don't completely understand it.

My favorite thing about Pinter is his ability to craft the English language into a character all its own. You can truly feel its presence on the stage. Just listening to the actors in this show - their brief monologues and longer verbal duals and word associations - is great fun. There are few props, no scene or set changes, no tricks of lighting or sound. This show is about the words and the acting.

I enjoyed the work that Hammersmith, Bronstein, Senecal, Hosford (she played Lulu the night I saw the show), Damon and Taulbee did on stage in parts both large and small. Damon, in particular, did yeoman's duty with a great many lines, and was grinningly sinister.

I also appreciated Senecal's skill during the third act of the play when he sat in terrified silence, communicating a great deal to the audience while saying almost nothing.

Taulbee, an accomplished singer as well as actor, had a brief but especially sweet moment when he sang a bit of the Irish ballad "Come Back, Paddy Reilly." It contrasted wonderfully with his toughguy character, but was so Pinteresque.

I also really enjoyed Bronstein's performance as Meg, with her naiveté and fear of wheelbarrows. She kept asking, "Was it nice?" Yes, it was. I've seen Bronstein in a number of shows; I've never seen her better.

I liked what Hammersmith and Hosford did with their smaller parts. The characters they played are important to this show, and the two actors made them count.

Diego Acosta served as assistant director and also helped Caroe design the set. Peter Herman did the light design and Autumn Gieb was the costume designer. Eva Carabotta was the light and sound board operator, assisted by Daniel Caroe. 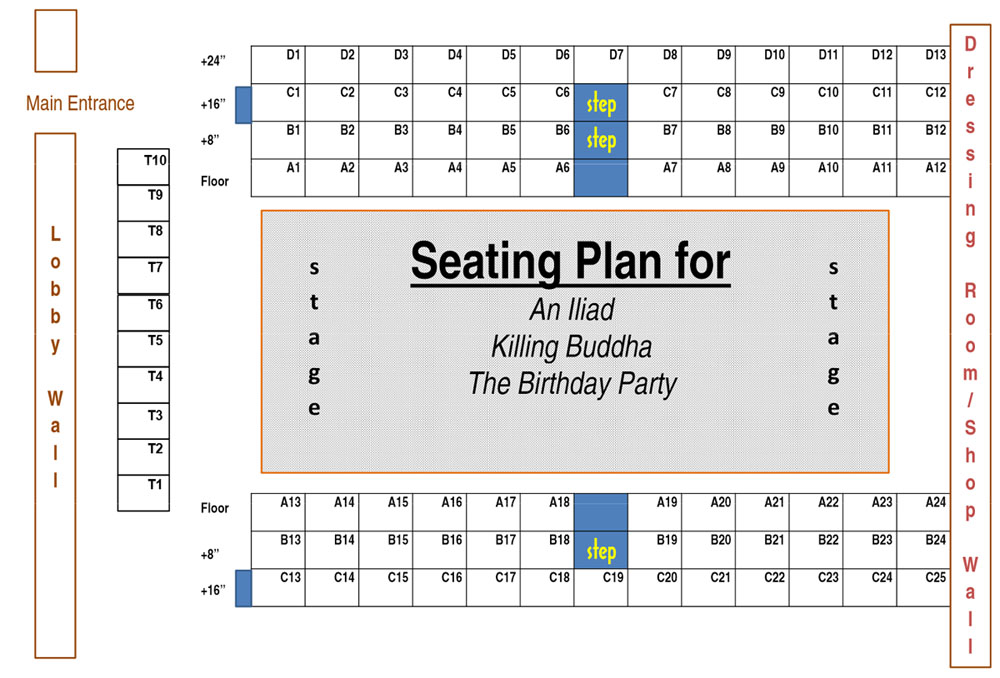