The Gilbert & Sullivan Company of El Paso proudly presents H.M.S. Pinafore for its summer 2021 season. Performances are on August 8 at 2:30 p.m. and 7:00 p.m. at the Black Box Theatre, 430 N. Main Street, Las Cruces. This fanciful comedy is one of the most beloved and delightful of the Gilbert and Sullivan operettas. It is a cheerful satire on the arrival of the modernity, bureaucracy and democratic ideals to the Royal Navy of Queen Victoria's era and pokes fun at the Royal Navy, parliamentary politics and the rise of unqualified people to positions of authority.

The story takes place aboard a British ship, where Captain Corcoran's daughter, Josephine, has fallen in love with an ordinary sailor, Ralph Rackstraw. As the crew works to get things shipshape for the arrival of Sir Joseph Porter, Corcoran's choice for a more sophisticated suitor for his daughter, Josephine decides initially to abide by her father's wishes and marry him. Conventional social order is quickly overturned, however, when Sir Joseph arrives and advocates for the equality of humankind. With a change of heart, Josephine declares her love for the ordinary sailor and the two - through the help of the crew, sisters, cousins and aunts - make plans to elope that night. When the captain discovers the plot, a surprise disclosure, as is typical of many Gilbert and Sullivan's works, changes things dramatically. H.M.S. Pinafore is filled with memorable music and a surprise twist.

With singing, drama, comedy and a beautiful love story all in one, this Gilbert and Sullivan classic comic opera is perfect for everyone, young or old! The Gilbert & Sullivan Company of El Paso was founded by Joan Quarm (dec.) in 1969 with the purpose of education by preserving and presenting the works of W.S. Gilbert & Arthur Sullivan. The company relies on ticket sales for the majority of its operating revenues, and also receives support from the City of El Paso Museums and Cultural Affairs Department and the Texas Commission on the Arts.

Reservations can be made by calling the Black Box Theatre at (575) 523-1223 or online at www.no-strings.org. For more information about the Gilbert and Sullivan Company of El Paso, visit their website (GandSelpaso.org) or call (915) 479-2485. 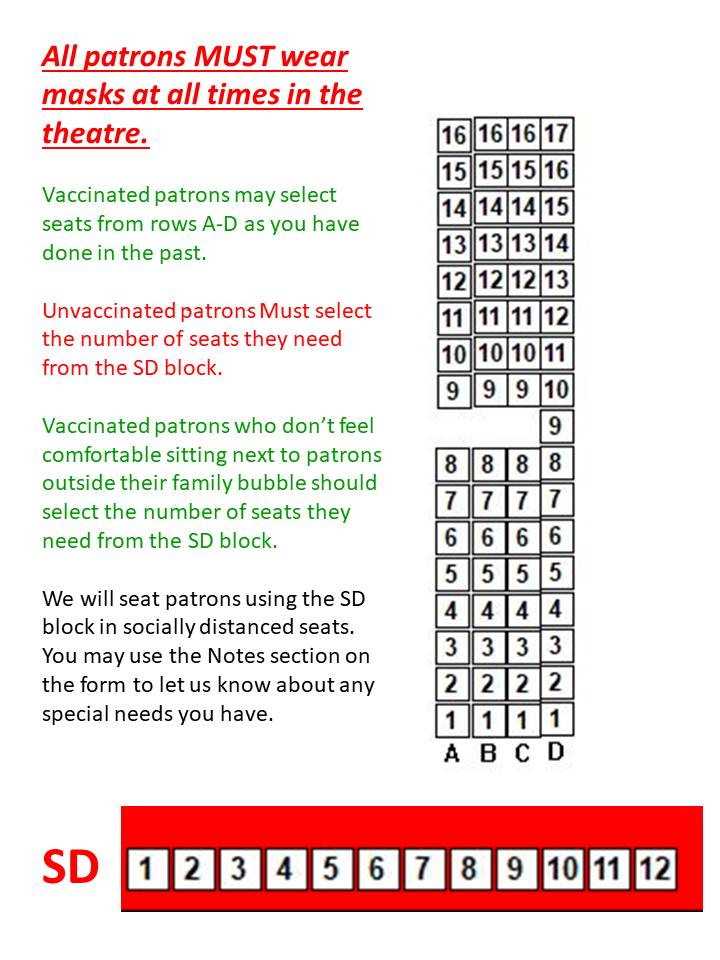 The regular ticketing system will be in use for our next regular performance, A Coupla White Chicks Sitting Around Talking as well as HMS Pinafore. We will return to the "normal" 3/4 round seating configuration. Vaccinated patrons my choose any seat(s) they wish from the selection diagram provided. Unvaccinated patrons or vaccinated patrons who don't feel comfortable sitting next to people not in their family bubble should call the theatre and we will assign you socially distanced seats. ALL PATRONS MUST WEAR MASKS AT ALL TIMES

There will be NO reservations for the Super Secret Improv Show # 5. Tickets at the door CASH or Checks ONLY