The Every Brilliant Thing

This lovely one-woman show featuring Autumn Gieb will mark the official opening of NSTC's 2002-2021 indoor season! There are only 33 seats per performance so reserve early!

You're six years old. Mom's in hospital. Dad says she's "done something stupid." She finds it hard to be happy. So you start to make a list of everything that's brilliant about the world. Everything that's worth living for. 1. Ice cream. 2. Kung Fu movies. 3. Burning things. 4. Laughing so hard you shoot milk out your nose. 5. Construction cranes. 6. Me. You leave it on her pillow. You know she's read it because she's corrected your spelling. Soon, the list will take on a life of its own.

As it turns out, there are a million and two brilliant things in Black Box Theatre's current production of Every Brilliant Thing.

There are the million things in the list that is central to the play, there is the fact that this production marks the return of live theater to Las Cruces and there is the performance by Autumn Gieb.

This is a one-woman show, and brilliant is the word for Gieb's work. She is in full command of her character and she owns every inch of the stage from the moment she steps on it.

Gieb's character is also the show's narrator, drawing many audience members into the performance (staying safely in their seats), including theater owners Ceil and Peter Herman. Ceil, who directed the play, plays a school counselor and voices a sock puppet.

Ceil and Peter had been part of rehearsals for the play, but the rest of us in the audience didn't know what lines we might be asked to recite or ad lib. It added sparkle and spontaneity to the already highly polished production.

It also added another dimension to Gieb's performance. She sometimes waited for a response from an audience member, sometimes encouraged it and always seamlessly incorporated whatever she got into the scene. Gieb was never rattled, never thrown off, never pulled out of character. This is her Gieb's show, and she is outstanding.

This is a play about coping with a loved one's severe depression and attempted suicide. Its message is relevant and stark. Its story might make you cry a bit; it certainly will make you laugh. Its star is brilliant.

All state public health orders will be complied with throughout the production, including 33 percent theater capacity. All audience members are required to wear masks throughout the performance.

Tickets are $15 general admission, $12 for seniors and students and $10 for the Thursday night performance only. 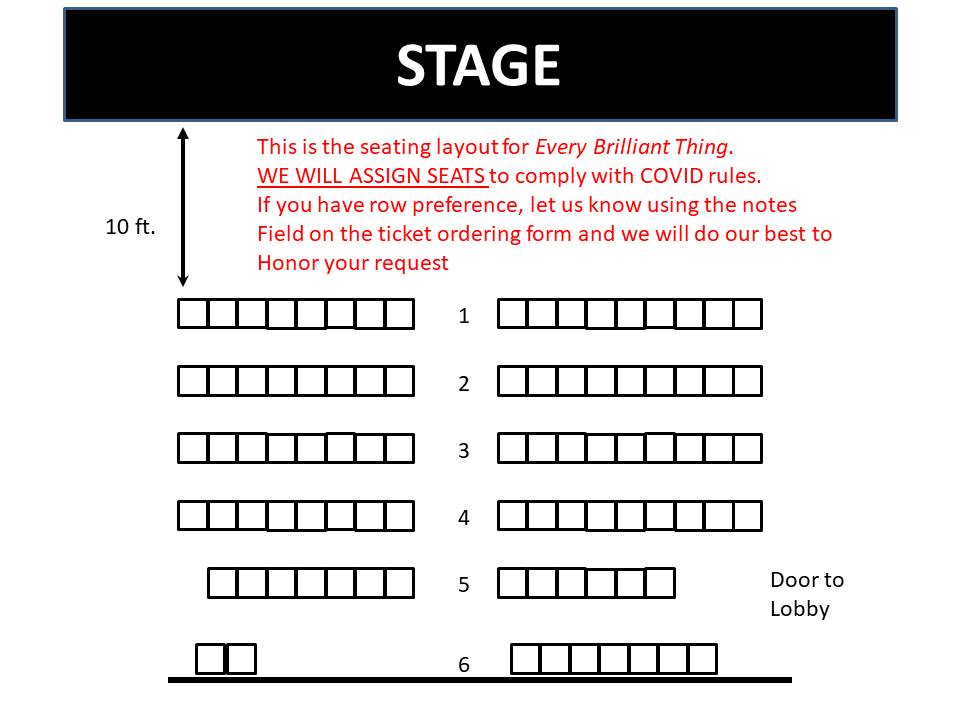 We will be using our regular ticketing system for The Super Secret Improv Show #4. Seating will be limited to 33 and if there are any seats not reserved by 4 hours before the show they will be available on a first come first served basis at the door starting at 1:45. Please call the theatre first to see if there are seats available.


Our current regular production is Every Brilliant Thing. The normal ticketing system is in use but you may only select the number of seats you require and we will assign seats to comply with NM Covid requirements. The stage is 10 feet from the first row. You may request row 1, 2, 3, 4, 5, or 6 and we will do our best to honor your request. Please see the event pages for details.