Dotty's life in Sterno with her husband Hamel is absolutely perfect! It's a fairy tale, it really is. True, in their seven years of marriage Hamel has forbidden her to leave their tiny apartment or speak to anyone, but Dotty is so very happy to spend her days watching video re-enactments of the day they first met. When a phone call from a mysterious woman threatens to tear their world asunder, Dotty must venture out into the vast city of Sterno, and try to discover what it is to be a "real" woman.

"Out of Sterno" is a coming-of-age play in an Alice in Wonderland world. It explores the triumph and heartbreak of growing up and the contradictory societal pressures women face just trying to make it across town.

The play is written by Deborah Zoe Laufer and directed by Ceil Herman.

Veteran actors Nora Thomas, Marissa Bond, Rafael Medina and David Reyes make up the cast of this entertaining and engaging play.Lana Eckman is Costume Designer, Peter Herman designed Lights and Set, Karen Ross is Stage Manager, Tommy Medina is the light board operator, and Darrel Lowry is the Backstage crew..

Deborah Zoe Laufer's plays have been produced at Steppenwolf Theatre Company, Cleveland Playhouse, Geva Theatre Center, Cincinnati Playhouse in the Park, Actor's Theatre of Louisville, Portland Stage, and eighty other theaters around the country, in Germany, Russia and Canada. End Days was awarded The ATCA Steinberg citation and appeared at Ensemble Studio Theatre through an Alfred P. Sloan Foundation Grant. Informed Consent, which was a Sloan commission was produced in 2015 by Primary Stages and EST. Other plays include Leveling Up, Sirens, The Last Schwartz, Meta, The Three Sisters of Weehawken, Fortune, The Gulf of Westchester, Miniatures, and Random Acts. She is a recipient of the Helen Merrill Playwriting Award and the Lilly Award and grants and commissions from The Edgerton Foundation, the NEA and NNPN. Her plays have been developed at PlayPenn, The Eugene O'Neill NPC, Williamstown Theatre Festival, Ojai, The Missoula Colony, The Cherry Lane Alternative, The Dramatists Guild, New Georges, The Lark, Asolo Rep. and the Baltic Playwrights Conference. She is a graduate of The Juilliard School and a member of the BMI Lehman Engel Musical Theatre Workshop and The Dramatists Guild.

I was having tea with my friend Lisa Dillman, and the subject of plays for this current season came up. She suggested I look at the works of this playwright. I decided that Out of Sterno was the perfect play for me to direct at the Black Box Theatre. I felt a very strong connection with Dotty. I had a very good friend who was trapped in a marriage similar to this one. That story, unlike this one, ended in tragedy for the husband, and my friend moved out of town and started her new life. In a more universal sense, there are boundaries and constraints for all of us, and the journey and ultimate triumph, is to conquer them and move on. It's been a great deal of fun working on Out of Sterno with my perfect cast and creative team. I hope you will enjoy this show and that it will give you plenty to think and talk about after.

Black Box Theatre's "Out of Sterno" is a most unusual play.

To begin with (it quite literally started at the very beginning of the show), the lead, Dotty, talks to the audience, offers them cheese doodles and passes around a photo of her husband.

Sterno is a city, you see.

Dotty lives there with her husband, Hamel, who keeps her on a very tight rein. She never leaves their apartment building, and only leaves the apartment itself to do his laundry.

But Dotty is forced to venture out after she gets a strange phone call and receives visits from a deliveryman and a taxi driver which make her suspicious of Hamel's fidelity.

Dotty spends much of the first act in a house dress and slippers - even when she goes out - and ultimately agrees to participate in a very interesting murder plot.

Close to the end of the first act, I thought I had the ending all figured out. Boy, was I wrong - and I love that. Playwright Deborah Zoe Laufer has a few tricks up her sleeve.

I liked the play more and more as it developed. It's an interesting and unusual story that I will be thinking about for days to come.

I'm glad director Ceil Herman chose this play and I have only kudos for the cast she picked.

Nora Thomas-Medina, whose directorial work I have enjoyed on many occasions, was a terrific Dotty. Like the script, she got stronger and stronger as the story developed. I liked her and felt sorry for her at the beginning; I loved and admired her by the end. This is a vibrant performance that Thomas-Medina should be very proud of.

I confess that Marissa Bond is one of my favorite actresses.

Her performance in "I, Custer" last year at LCCT was one of the finest performances I've ever seen. She has done stellar work in other shows as well, and her performance as Zena in "Out of Sterno" is no exception. Costumer Lana Eckman knew exactly how to dress Bond to accentuate her beauty and highlight her character's fabulous flaws.

Rafael Medina has had more challenging roles than Hamel, including his recent work as the title character in "Agamemnon" at Black Box, but, I honestly have never seen him give a better performance than he did in "Out of Sterno."

He was so completely believable in everything he did as the arrogant, dim-witted and ultimately regretful husband.

I've also seen David Reyes play a lot of parts in a lot of plays in a lot of theaters in Las Cruces. The audience loved every one of the more than half dozen men and women he portrayed in "Out of Sterno." I think my favorite was Dotty's bus buddy, Sally Mae. Reyes captured both the sweetness and the wisdom of this heavily pregnant character.

This is a really good show. Go see it. It will make you laugh, it might make you cry a little and it will certainly make you think.

Tickets are $15 regular admission, $12 for students and seniors age 65 and above and $10 for the Thursday night performance.


Oh my, my! Out of Sterno by Deborah Zoe Laufer, the No Strings Theatre Company's current production at the Black Box Theatre takes away any cold temperatures swirling about Las Cruces.

Marissa Bond, Nora Thomas Medina, Rafael Medina and David Reyes could not be better matched for the ingenious lines Laufer provides as a naive young wife discovers her husband is not the man she knows him to be.

Understanding individual societal behavior in two hours through non-stop humor laced with tragedy can only be accomplished with astute acting. These four definitely do it.

Dotty (Thomas) who wears her wedding band so proudly and lovingly, her husband, Hamel (Medina) who keeps her forever for himself alone; Zena (Bond) who portrays human complexity brilliantly and eight characters ( Reyes) who brings humor, reality and pathos each time he appears, bring Laufer's ideas and insights into a cohesive narrative.

Included in her ideas and insights--human dignity, individuality, understanding self and self-worth, women's rights, societal pressure, human complexities and the quest for love, sex, companionship, dependency and freedom. Really, it is all there and easy to comprehend.

Ceil Herman, the play's director, has taken a script that could be mundane and depressive by a less experienced director, interpreting it with positive vision where characters react to situations in unpredictable and even delightful ways.

The Peter Herman designed lights and set complement the production seamlessly as does the work of Tommy Medina on light board and Karen Ross as stage manager. 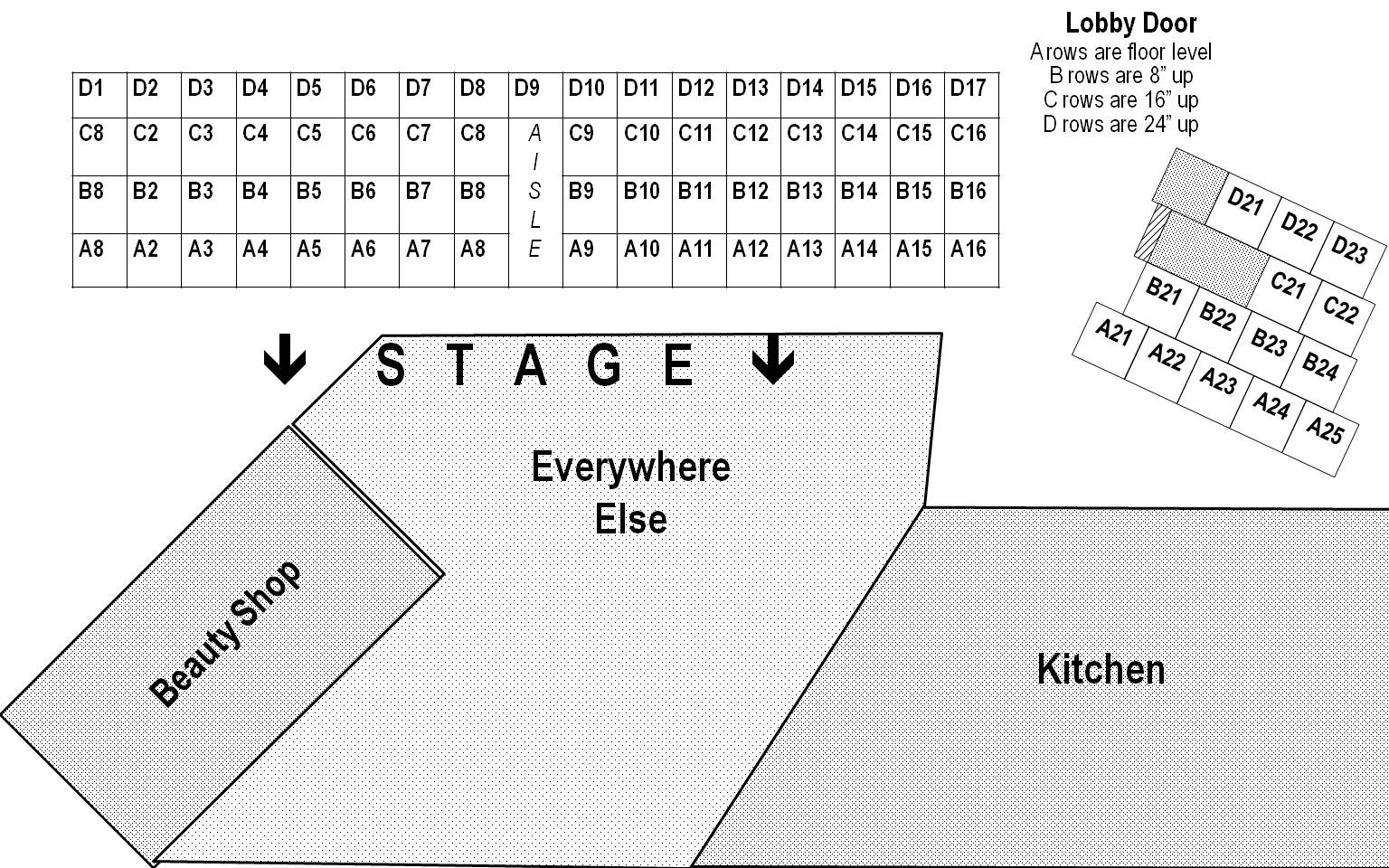